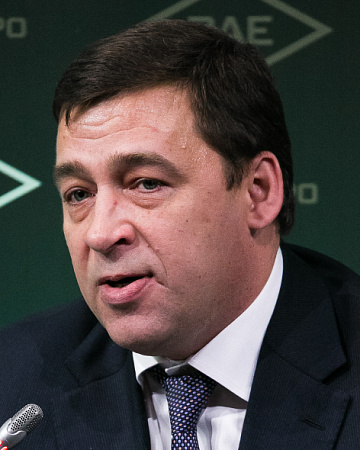 EVGENIY KUYVASHEV
Governor of the Sverdlovsk Region
Born in 1971.
In 1999 graduated from the Moscow Military Institute of the Federal Border Service of the Russian Federation.
In 2010 completed a professional retraining course at Tyumen State University, majoring in public and municipal administration. His educational specialisation is jurisprudence and he is a qualified lawyer.
After working for Surgutremstroy Trust and serving in the Soviet Army, studied at Tobolsk Medical School and then moved to the Poikovsky settlement of the Nefteyugansk district where from 1997 to 2005 worked at the local administration, including as the head of the administration.
In 2005 was appointed Deputy Head of the Main Directorate of the Federal Bailiffs вЂ™ Service for Moscow – Deputy Bailiff of Moscow.
From December 2005 to July 2007 served as Head of the Tobolsk Administration.
From July 2007 to January 2011 was Head of the Tyumen Administration.
On 29 January 2011 was appointed Deputy Presidential Plenipotentiary Envoy to the Urals Federal District by an order of the Chief of Staff of Presidential Executive Office.
On 6 September 2011 was appointed Presidential Plenipotentiary Envoy to the Urals Federal District.
On 14 May 2012 was appointed Acting Governor of the Sverdlovskaya region.
On 29 May 2012 was confirmed as Governor of the Sverdlovskaya region.
Russian
e