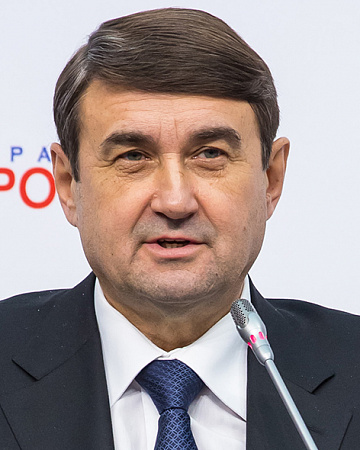 IGOR LEVITIN
Aide to the President
Russian Federation
Born in 1952.
In 1973 graduated from the Railway Corps and Military Transport School, Leningrad (now St Petersburg).
In 1983 graduated from the Military Logistics Support and Transport Academy with a degree in Railway Engineering.
From 1983 to 1985 – Military Commandant of a railway section and Urgal station on the Baikal-Amur railway line (BAM). Took part in driving the Golden Spike, when eastern and western sections of the BAM were linked.
From 1985 to 1994 – Section Military Commandant, Head of a Military Transport Department and Deputy Head of Military Transport on the Moscow Railway.
From 1996 to 2004 – employed at SeverStalTrans.
From 1998 – Deputy CEO of SeverStalTrans; supervised the transport engineering sector, railway transport and seaport operations.
From March 9, 2004 – appointed Transport and Communications Minister.
From May 20, 2004 – appointed Transport Minister.
From May 21, 2012 – Adviser to the President of the Russian Federation.
From September 2, 2013 – Aide to the President of the Russian Federation.
Was a member of the Public Council of the Government Commission for the Railway Transport Reform.
Russian
e