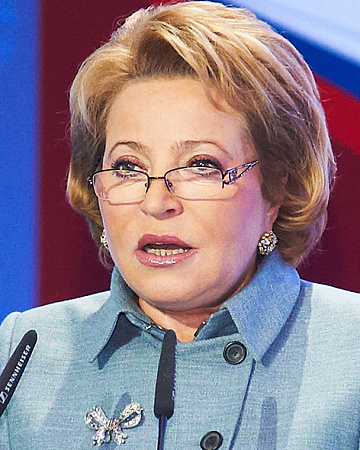 VALENTINA MATVIENKO
Chairman
Federation Council of the Federal Assembly of the Russian Federation
Born in 1949.
In 1972 graduated from the Leningrad Chemical and Pharmaceutical Institute, in 1985 from the Academy of Social Sciences under the CPSU Central Committee, and in 1991 from senior diplomatic staff development courses at the USSR Ministry of Foreign Affairs Diplomatic Academy.
From 1972 worked for the Komsomol. Her career progressed from head of department in the Petrograd district Komsomol committee to First Secretary of the Leningrad Region Komsomol committee.
From 1984 to 1986 worked as First Secretary of the Krasnogvardeysky district CPSU committee. From 1986 to 1989 was Deputy Chairman of the Executive Committee of the Leningrad Soviet.
In 1989 was elected a USSR People's Deputy. Was chairman of the USSR Supreme Soviet Committee on Women's Affairs and Protection of Family, Maternity and Childhood.
From 1991 to 1998 worked in the diplomatic service: was USSR Ambassador to the Republic of Malta (1991 – 1994), director of the Ministry of Foreign Affairs Department for Relations with the Constituent Territories of the Federation, Parliament and Socio-Political Organisations (1995 – 1997), a member of the collegium of the Ministry of Foreign Affairs (1995 – 1997), and Russian Ambassador to Greece (1997 – 1998).
From 1998 to 2003 worked as Deputy Prime Minister of the Russian Federation, with responsibility for the social sphere.
On 19 March 2003 was appointed Plenipotentiary Envoy of the President of the Russian Federation to the Northwestern Federal District.
On 5 October 2003 was elected Governor of St Petersburg.
On 20 December 2006 was vested with the authority of Governor of St Petersburg by the Legislative Assembly of St Petersburg on the recommendation of Vladimir Putin, president of Russia, for the period up to 2011.
On 22 August 2011 was elected a Deputy of the Municipal Council for the Krasnenkaya Rechka municipal district of the fourth convocation.
On 31 August 2011 was appointed a member of the Federation Council of the Federal Assembly of the Russian Federation and representative of the St Petersburg executive body of state authority in the Federation Council of the Federal Assembly of the Russian Federation.
On 21 September 2011 was elected Chairman of the Federation Council of the Federal Assembly of the Russian Federation.
Russian
e