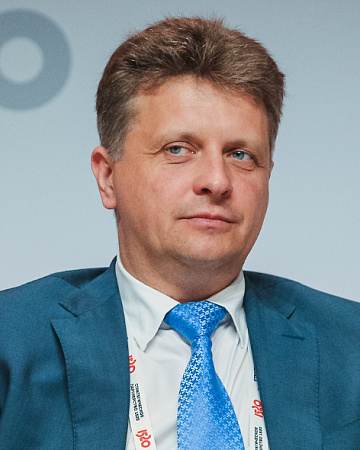 MAXIM SOKOLOV
Minister of Transport
Russian Federation (2012-2018)
Born in 1968.
From 1987 to 1989 served as a conscript in the army.
In 1991 graduated from the economics department of St Petersburg State University.
From 1989 to 1991 also studied in the same university's law department. From 1991 to 1993 taught in the economics department of St Petersburg State University.
From 1992 to 1999 was general director of Rossi.
From 1999 to 2004 was general director of Corporation S.
From 2004 to 2009 was chairman of the St Petersburg Administration's Committee for Investment and Strategic Projects.
In 2009 was a member of the St Petersburg Administration and chairman of the Committee for Economic Development, Industrial Policy and Trade.
On 4 December 2009 was appointed director of the Department of Industry and Infrastructure of the Government of the Russian Federation.
On 21 May 2012 was appointed Minister of Transport of the Russian Federation by Presidential Decree number 660.
Has been awarded the medal of the Order of Service to the Fatherland 2 nd Class and the Governor of St Petersburg's badge for the humanisation of St Petersburg's schools.
Russian
e